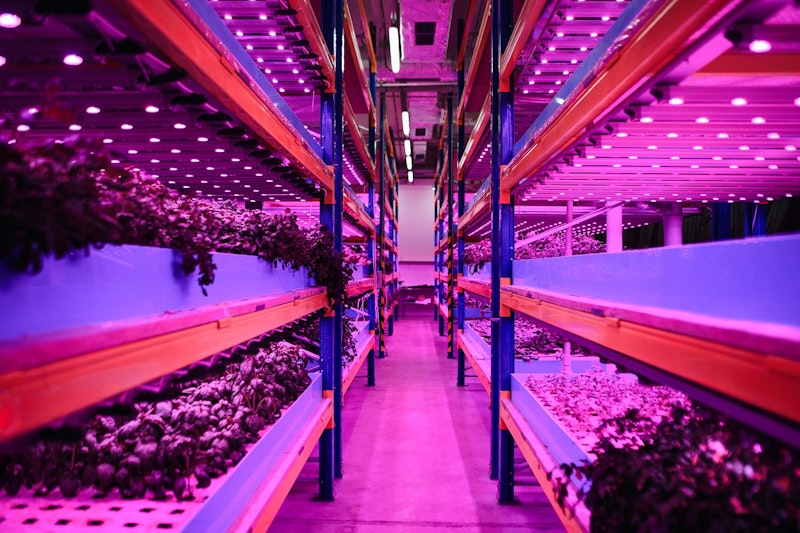 Vertical farming, the practice of growing crops indoors on vertically stacked layers, has received no small amount of interest over the last few years. Vertical farms commonly tout impressive numbers, such as using 95% less water and providing crop yields 20-30 times that of conventional agriculture. These claims, among many others, have seen many vertical farming start-ups being founded alongside large amounts of industry funding; funding for the industry reached a record high in 2021, with over US$1 billion being raised across the entire industry. The recent IDTechEx report, "Vertical Farming 2022-2032", details the economic and technological factors shaping this rapidly growing industry. 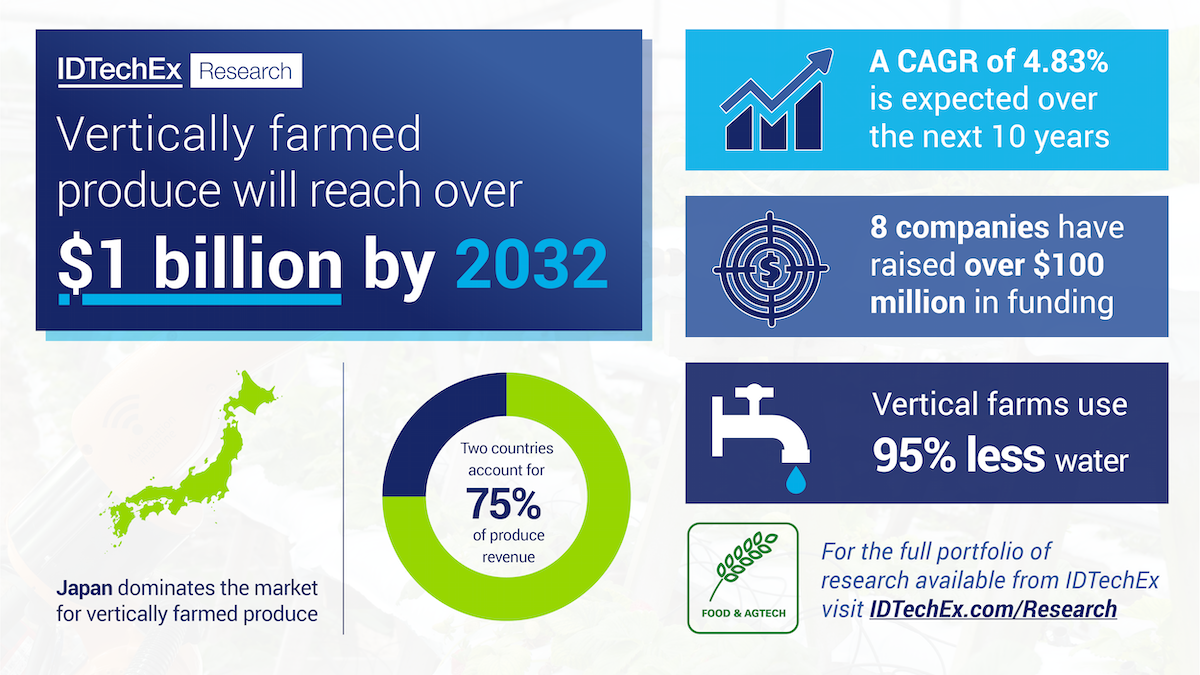 Source: IDTechEx - "Vertical Farming 2022-2032"
With crops being grown indoors under controlled environments, a selling point used by multiple vertical farms is that they can grow crops anywhere - even in the heart of a city. This has led to proponents of the industry envisioning "smart cities", where vertical farms in city skyscrapers help feed the urban population. While this is achievable in principle, the truth is that the choice of location for vertical farming is much more involved and intricate than it may appear from these claims alone. Choosing an ideal location can be one of the most important factors in determining the success of a vertical farm.
Some vertical farms may choose to set up their facilities in pre-existing facilities, such as abandoned warehouses. In these cases, identifying the suitability of the venue is the first point of consideration: vertical farms are very energy intensive, and it is important to ensure the facilities chosen can support these energy loads. In addition, the ergonomics of the facility is also important; should the layout not be given proper consideration, this can impede workers and decrease worker efficiency. As labor costs are typically among the largest sources of expenditure for a vertical farm, improving labor efficiency to reduce these costs is of paramount importance.
While growing crops in the center of a city may seem ideal, the reality is that this may be counterproductive. Obtaining and maintaining such a location is expensive and can contribute significantly to the operating expenditure of a vertical farm while presenting logistical challenges in distributing produce; the "last mile" of food distribution is often the hardest. Having a farm right next to the consumers themselves may also be less ideal than instead choosing a location near food distribution centers, as this allows for more efficient delivery of produce. As distribution centers are typically located on the outskirts of cities, the cost of land is also much cheaper. This is the approach chosen by UK-based Jones Food Company, which chose Scunthorpe as a location for its vertical farm - this is a relatively low-cost location located near food distribution centers and a network of motorways that could still reach many consumers in a day, even if it isn't right in the middle of the capital city. Vertical farms should carefully consider their place in the supply chain before establishing a base.
On a larger scale, vertical farms may prove more profitable in different geographical regions. Vertical farms can reduce water usage significantly over conventional agriculture, and the high degree of control over the growing environment allows them to grow crops in extreme climates - where such crops may not otherwise be able to grow. In return, vertical farms demand more energy to carry out growing operations. To maximize their potential, vertical farms would ideally be located in regions of water scarcity, such as Sub-Saharan Africa and the Middle East, or in areas with extreme climates, such as in Scandinavian countries, where the low amounts of sunlight and high costs of regulating greenhouse environments single out vertical farms as an optimal solution. The amount of agricultural land available is also an important factor - regions looking to increase food security and reduce reliance on imports while facing challenges in acquiring sufficient agricultural land would find vertical farms to be ideal. A particularly prominent example of such a country is Singapore, which has demonstrated much interest in vertical farming over the last few years.
Beyond the considerations of water scarcity and temperature, the general availability of fresh produce and the distribution networks of given countries should also be considered. Vertical farms use the added freshness and higher quality of their crops as a primary selling point, but these are typically offset by higher prices. Should there already be a large supply of high-quality produce made available at lower costs, vertical farms will find it hard to distinguish their own produce and may struggle to establish a significant market share. The converse would also be true; should a country lack easy access to fresh produce, vertical farms are expected to see much demand for their produce. An example of such a region would be the Middle East: leafy greens typically travel several thousand miles to reach stores, resulting in consumers facing high prices and low-quality products. The high price of conventionally farmed leafy greens, alongside government subsidies, makes it easier for vertically farmed produce to approach price parity while providing much fresher, higher-quality products.
While the choice of location is an important consideration, it is only one of many others that must be given proper thought. Only through proper optimization of growing operations to improve efficiency and reduce costs can vertical farms reach their true potential. In the IDTechEx report, "Vertical Farming 2022-2032", many further important factors for consideration are discussed in detail, and the future of vertical farming is evaluated through 10-year market forecasts.
For more information on this report, please visit www.IDTechEx.com/VertFarm or for the full portfolio of AgTech research available from IDTechEx please visit www.IDTechEx.com/Research/AgTech.
IDTechEx guides your strategic business decisions through its Research, Subscription and Consultancy products, helping you profit from emerging technologies. For more information, contact research@IDTechEx.com or visit www.IDTechEx.com.