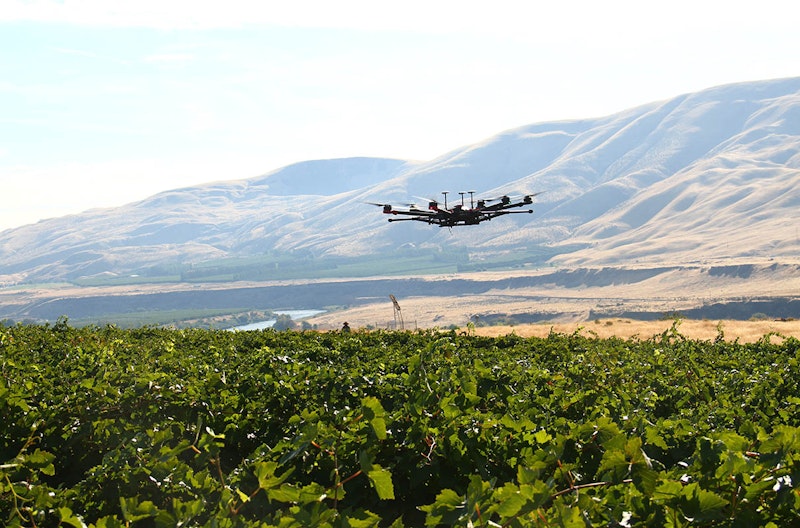 In the future, cameras could spot blackbirds feeding on grapes in a vineyard and launch drones to drive off the avian irritants, then return to watch for the next invading flock. All without a human nearby. A Washington State University research team has developed just such a system, which they detail in a study published in the journal Computer and Electronics in Agriculture. The system is designed to have automated drones available to patrol 24 hours a day to deter pest birds, like European starlings or crows, that cost growers millions of dollars a year in stolen or ruined fruit.
"Growers don't really have a good tool they can rely on for deterring pest birds at an affordable price," said Manoj Karkee, associate professor in WSU's Department of Biological Systems Engineering and the study's corresponding author. "With further refinement and industry partnerships, this system could work."
For the study, the team ran two separate tests: detecting birds and deploying drones automatically. Over a few years, Karkee's team developed a camera system and algorithm that would find birds and count them as they flew in and out of fields. The team customized very small drones and deployed them for flight tests on small plots with simulated birds. For further information see the IDTechEx report on Agricultural Robots and Drones 2022-2032: Technologies, Markets & Players
Technologically, the system resembles drone package delivery systems. It will be several years before this particular technology would be commercially available for growers because there are still several hurdles, including making sure it works at scale, complies with federal drone regulations, and continues to deter birds even if drones are commonly flying around.
"Birds are really clever," said Karkee, who is also affiliated with WSU's Center for Precision & Automated Agricultural Systems. "They often find ways around deterrents. We don't want a system that only lasts for a few months or years before they stop being scared off."
For now, the birds are scared off just by the motion and whirring noises made by drones. But Karkee said that sounds, like distress calls or predatory bird noises, could be added. Builders could even design special drones for the job.
"We could make drones look like predators, or have reflective propellers that are really shiny," he said. "All of these working together would likely keep birds away from those vineyards and fields. We need to research that over multiple years to make sure."
The automation research is the third in a series of three studies concerning drones and bird pests. The first showed that manually operated drones, doing random flights, successfully drive off or keep birds away from vineyards. They found that drones reduced bird counts four-fold. The second project showed the impact driving off the birds can have on crop yield. Karkee's team followed up on the fields where they manually drove birds off. Those fields had around 50% reduction in damaged fruits.
Karkee plans to meet with growers, technology companies, and other stakeholders to start next steps on working toward a commercially available automated drone system. "It takes time," he said. "But the results so far are exciting. We're looking forward to doing more work on this project."
Source and top image: Washington State University