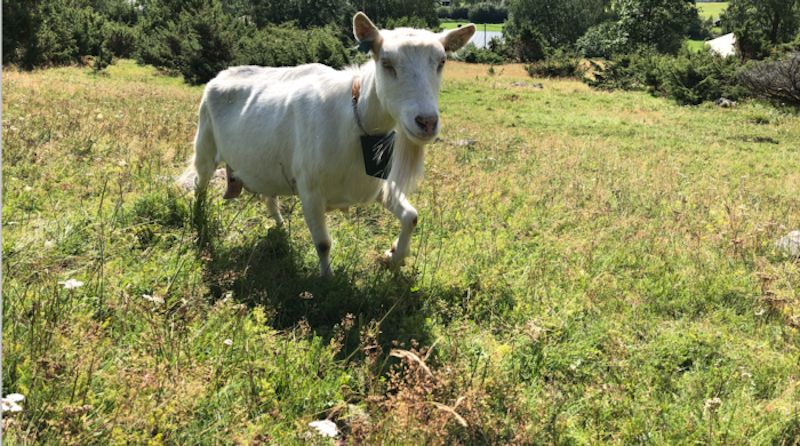 When grazing goats that are wearing this new technology hear a beep, it alerts them to stay within the invisible boundary of the grazing area. If they don't, a digital collar around their necks gives them a small electric shock. The new technology allows farmers to delineate the grazing areas digitally. Essentially, the technology replaces physical fences with virtual fences.
For the last five years, this Norwegian smart technology has provided almost limitless opportunities for goat keeping. More than 2400 Norwegian farmers currently use it on their animals.

The way it works

When a goat moves outside the virtual boundary, the collar's beacon transmits signals to the farmer's smartphone or tablet. This in turn triggers a beeping sound that gradually increases in strength. If the goat ignores the beeping sound for too long, it receives a small electric shock from the digital device around its neck. For further information see the IDTechEx report on Wearable Sensors 2021-2031.
Goats are smart, and most of them quickly learn that the beep is followed by a shock if they cross the boundary. The slight delay after the beep gives the goat a chance to get back inside the virtual fence before being zapped. Some goats are actually so clever that they graze just outside the boundary and turn tail before being zapped. It almost sounds a bit musical, says Roger A. Søraa, a researcher at Ruralis - the Institute for Rural and Regional Research, and the Department of Interdisciplinary Studies of Culture at the Norwegian University of Science and Technology, NTNU.

Ruralis and NTNU have engaged Søraa and his colleague Jostein Vik to study how the digital fencing technology has been introduced, and what the method means for modern goat farming in terms of practices, perceptions and guidelines. Professor Vik works at Ruralis and at NTNU's Department of Sociology and Political Science.
The researchers found that managing goat farms as a sideline, or to produce milk and meat, is made easier with the smart technology. But the technology opens up other possibilities as well: goats can become important contributors in the work of cultivating landscapes.
"It's possible to rent out goats that specialize in clearing areas. With the help of this technology, they can browse around power lines or all the way to the edge of roads, without the need to set up physical fences," says Søraa.
Traditional fencing involves a lot of work and expense for farmers, both to set them up and to maintain them. Another advantage of the technology is that farmers can follow their goats' movements and see if any have gotten stuck or are being chased. You can see a video here with more information about the goat project.

"Without this technology, fewer people would be able to continue as goat farmers, because they often need to have a second job. The trend in agriculture is for mechanization and digitization, which means fewer hands are needed to accomplish more tasks. We've chosen to call this new interplay between nature, culture and technology 'CyborGoat," says Søraa.
The technology has been developed in Norway and is gradually becoming quite widespread among the country's goat farmers. The prerequisite for being able to use the digital system is that the lay of the land allows the signals that the technology requires to be sent.

"It'll be exciting to see if the system also becomes a success outside the country's borders. According to the developers, more than 27 000 animals have a Nofence collar system. Sheep and cows have followed the goats, which were the first animals out. The farmers we interviewed were more sceptical of the device for sheep, since they have a different temperament than goats," says Søraa.
Nofence is also being tested on a large scale for sheep and cows now. But goat farmers believe that goats are smarter and less easily frightened than sheep, so it will be interesting to see how other animals react to the technology. Researchers have likewise looked at the challenges of introducing the new technology. Animal welfare has been a topic of debate because the technology uses electricity. But the system is now legal to use for herding sheep and cattle in Norway.
"Effective implementation is important in terms of technology, policy and user-friendliness. Developing the system further requires that politicians are involved and that the farmers - as the users - are heard," says Søraa.

The study is part of the SmaT project - Smart technology for sustainable agriculture. The goal of the SmaT project is to contribute to developing, adapting and introducing new sustainable technology for Norwegian agriculture. Robot and drone technology, digitization, sensor technology, electrification and precision agriculture are some of the possible directions.
The project is a collaboration between Ruralis - Institute for Rural and Regional Research, Felleskjøpet Agri, the Norwegian Agricultural Cooperative, Mære Agricultural School, NTNU - Department of Interdisciplinary Studies of Culture and Agriculture21 Trøndelag.
Source: Norwegian University of Science and Technology