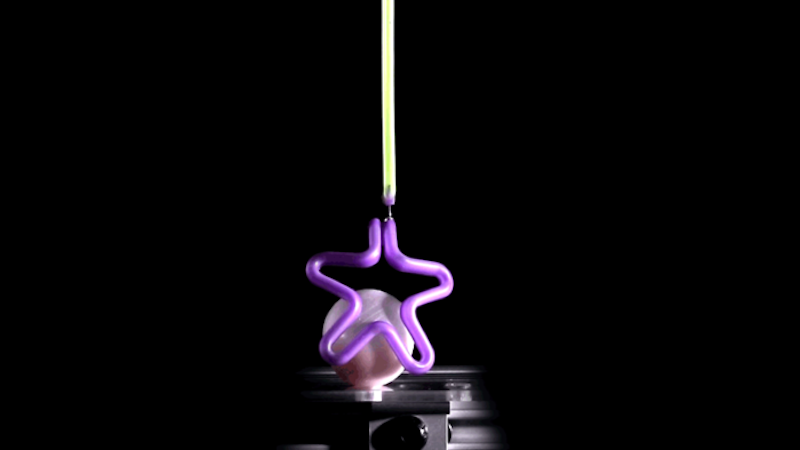 Princeton researchers have invented bubble casting, a new way to make soft robots using "fancy balloons" that change shape in predictable ways when inflated with air. The new system involves injecting bubbles into a liquid polymer, letting the material solidify and inflating the resulting device to make it bend and move. The researchers used this approach to design and create hands that grip, a fishtail that flaps and slinky-like coils that retrieve a ball. They hope that their simple and versatile method, published Nov. 10 in the journal Nature, will accelerate the development of new types of soft robots.
Traditional rigid robots have multiple uses, such as in manufacturing cars. "But they will not be able to hold your hands and allow you to move somewhere without breaking your wrist," said Pierre-Thomas Brun, an assistant professor of chemical and biological engineering and the lead researcher on the study. "They're not naturally geared to interact with the soft stuff, like humans or tomatoes."
Soft robots use squishier, flexible materials, making them desirable for applications that need a gentle touch. They may one day be used to harvest produce, grab delicate items off a conveyor belt or provide personal care. They may also be useful in health care, such as in wearable exosuits for rehabilitation or implantable devices that wrap around the heart to help it beat. For further information see the IDTechEx report on Agricultural Robotics Market 2022-2032.
One challenge in designing soft robots is controlling how they stretch and deform, which dictates how they move. All robots have components that cause movement, called actuators. Unlike rigid robots that move in fixed ways depending on their joints, the materials in soft robots have the potential to move and expand in an infinite number of ways.
Bubble casting offers a simple, flexible way to create actuators for soft robots using basic rules of fluid mechanics—the physics of fluids. The method uses a liquid polymer called elastomer, which cures to become a rubbery, elastic material. It is injected into a mold as simple as a drinking straw or a more complex shape, like a spiral or flipper. Next, the researchers inject air into the liquid elastomer to create a long bubble throughout the length of the mold. Thanks to gravity, the bubble slowly rises to the top as the elastomer drains to the bottom. Once the elastomer hardens, it can be removed from the mold and inflated with air, which causes the thin side with the bubble to stretch and curl in on the thicker base.
By controlling a handful of factors—the thickness of the elastomer coating the mold, how quickly the elastomer settles to the bottom and how long it takes to cure—the researchers can dictate how the resulting actuator will move. In other words, "fluid mechanics is doing the work," Brun said.
"If it's allowed more time to drain before curing, the film at the top will be thinner. And the thinner the film, the more it will stretch when you inflate it and cause greater overall bending," explained first author Trevor Jones, a graduate student in chemical and biological engineering.
The researchers successfully cast star-shaped "hands" that gently grip a blackberry, a coil that contracts like a muscle and even a set of "fingers" that curl up one by one as the entire system is inflated, as if playing the piano. The actuators in this paper deform when inflated with air, but other soft robotics systems employ magnetic fields, electric fields, or changes in temperature or humidity.
A large part of the work was figuring out how the robots would behave once inflated so that the researchers could design soft actuators with specific movements. Co-author Etienne Jambon-Puillet, a postdoctoral researcher in Brun's group, worked with Jones to develop a computer simulation of the system.
"We can predict what will happen using a simple equation that anyone can use," said Jambon-Puillet. "We understand quite well now what happens when we inflate these tube-like materials."
A major advantage of bubble casting is that it does not require 3D printers, laser cutters or other expensive tools typically used in soft robotics. The system is also scalable. It has the potential to yield actuators several meters long with features as thin as 100 microns—almost as small as a human hair.
"What's really smart is this idea to shape the structure just by natural fluid motion," said François Gallaire, a professor of fluid dynamics at the EPFL in Lausanne, Switzerland, who was not involved in the research. "These processes are going to work at many different scales, including for very tiny things. That's exciting because casting these tubes with typical fabrication methods could be really difficult, so there's the potential to make very small tubes."
Despite its flexibility, bubble casting does have its limits. So far, researchers have succeeded in forcing a bubble through only a few meters of elastomer-filled tubing. Also, overinflation can cause the balloons to pop. "Failure is fairly catastrophic," Jones said.
Next, the group will use their system to create more complex actuators and explore new applications. They are interested in designing actuators that move together in sequential waves, like the rippling feet of a walking millipede. Another possibility is creating actuators with chambers that alternately contract and relax using a single pressure source to inflate them, mimicking the beating of the human heart.
"We understand this problem at a physics level pretty strongly," said Jones, "so now the robotics can really be explored."
Source and top image: Princeton University, Engineering School